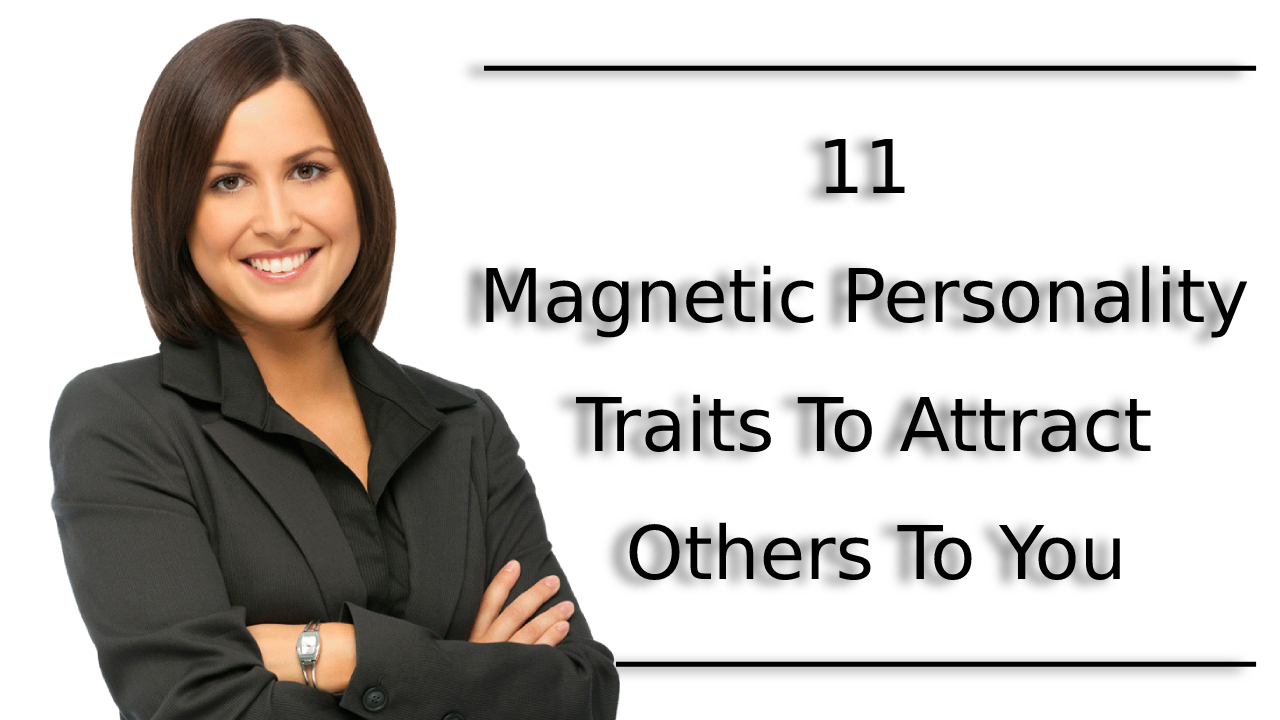 1. Healthy Optimism: Magnetic people tend to have a healthy dose of optimism ,in their positive attitude is never misplaced. They are always able to see the bright side of any situation. But their upbeat approach never invalidates the feelings of others, especially during difficult times. People with magnetism are never overoptimistic or dismissive when it comes to the classic glass half-full trope. They couldn’t care less about how much they have. It’s the quality of what’s in their glass that matters.

2. Authenticity: It’s hard to be compelling when you’re putting on an act. That’s why magnetic people never pretend to be someone they’re not. If they seem interested, excited or even annoyed. It’s because those are their true emotions. People with magnetic personalities are always true to who they are, so you don’t need to worry about any ulterior motives. Furthermore the authenticity of these people serves as an example for others to follow and their influence is greatly valued.

3. Well Spoken And Articulate: whether they need to comfort a friend motivate a colleague or share their emotions, magnetic people aware of what needs to be said and how their tone could change everything. That doesn’t necessarily mean that they left public speaking, and there are plenty of people with speech impediments to possess magnetic personalities too, when a magnetic person struggles with something they often use it to their advantage, since it helps others perceive them as more relatable or approachable. They are perfect but they always seem to know just what to say and how to say it.

4. Sense Of Humor: People who possess magnetic personalities are funny. Their humor is never at anyone’s expense, including their own self-deprecation, cruel criticism and poking fun at others faults are types of humor that push others away so magnetic People don’t even get close to those kinds of jokes. Instead they are bright and charismatic nature puts people at ease and creates connections through laughter.

5. Free Imagination: Those who possess charismatic magnetism tend to be creative thinkers too, apart of what makes these people so magnetic is their ability to see things from different perspectives. This helps them work through every possible solution to a problem. It also helps them collaborate well with others and understand new ideas having a free imagination also means that they don’t censor their ideas or worry about their contributions being good enough. This perspective avoids judgment and enables them to acknowledge others input without criticism.

6. Well Versed And Knowledgeable: those with magnetic personalities have growth mindsets and their hunger for knowledge often involves information regarding people know that’s not a fancy way of saying gossip. It means they like to learn about the details, strategies and even histories that affect others. This can mean getting to know someone better learning about sociology, reading about current events, and even practicing more meaningful engagement with others and whatever they learn that knowledge is definitely put to good use.

7. Thoughtful And Considerate: magnetic people care about the well-being of others. Much of their traction comes from their thoughtful behavior toward people. They genuinely want to have a positive impact on the lives of others from colleagues to family members, Such a person cannot tolerate a toxic environment so they’ll do everything in their power to make it nurturing instead and if they slip up in their nearly unfaltering kindness, apologies, and amends are not far behind.

8. Inspires Others: it’s probably not a surprise that magnetic people are also inspirational. Not only do they serve as a role model for healthy attitudes and behaviors, but these people also actively inspire others to be better. They offer encouragement, motivation and support to anyone who needs it. While never forcing anything on to people who don’t want it, magnetic individuals believe that everyone has good in them and that everyone can do better and these beliefs are contagious.

9. Natural Curiosity: If you were alone with the magnetic person you would feel like the most interesting person in the world and not because you are being tricked with fake interest. Those with attractive personalities possess a natural curiosity that gives them a genuine interest in people, stories, experiences, passions and knowledge and they freely give that interest to you and everyone they meet their interest also helps them remember details about what they’ve learned, including many names and faces.

10. Sincere And Honest: allies like poison, it can kill a relationship and magnetic people know this. That’s why they avoid lies like the play, no matter the length or depth of relationship they are always honest and sincere. These people would never dream of hurting someone with a lie. Which is why they’re always upfront about their intentions, values and beliefs as sincere people. They never hide their true feelings. So if you ask them what’s on their mind. Expect an honest answer, even if it’s not pretty. That’s not to say that magnetic people with our hearts on their sleeves just because they don’t lie, doesn’t mean they share everything.

11. Strong Self-confidence: magnetic people have a strong sense of self-confidence. They don’t rely on external validation. And they definitely don’t like criticism, scrutiny, or even hateful comments impact their self-esteem. People with magnetic personalities hold their own. By knowing their true worth and refusing to spend energy on those who don’t recognize their intrinsic value for these people, failure and rejection are not things to be feared, but rather necessary evils on the way to success their happy to receive feedback from colleagues, friends, partners or the universe and they use that information to grow.

Having a magnetic personality is in about looks, abilities or noise. It’s about who you are, deep down, and how that makes other people feel and it isn’t a gift that you either have or don’t have. It’s something you can work on and improve if you nurture these magnetic traits people will naturally begin to gravitate toward you. And when others feel good in your presence. They look forward to seeing you and they enjoy spending time with you. After all, people may forget what you did what you said they will always remember how you made them feel.

what you think. Which of these traits you have and which ones you need to work on. If you enjoyed this article. give a thumbs up and share with your friends so we can keep making them for more article like this. Thanks for reading.